The focus of the rehabilitation phase is the rebuilding of lost body tissues, psychosocial stimulation and preparation for discharge and follow-up. In all, the treatment using the guidelines is executed in 10 essential steps. Institution gate keepers also granted permission to gain access into the study area. Using the informed consent form potential participants were assured voluntary participation; were at liberty to withdraw from the study at any stage without penalty; and anonymity and confidentiality of information provided.

Each participant signed the informed consent form. Hazards to participants were not anticipated and none were recorded during the study. This cross-sectional study was conducted in four randomly selected hospitals located in the Tamale Metropolis of Ghana during the period January to July All hospitals, both private and public, located in the metropolis were listed and four hospitals were selected through the lot. All of these hospitals provide both inpatient and outpatient treatment for severely malnourished children. All student nurses and those who were awaiting results from the Nurses and Midwives Licensure Examinations were excluded from the study.

Also, nursing administrators were excluded for their limited involvement in the clinical management and treatment of patients. Permission to have access to the hospital was granted by the directors of the hospitals and the respective unit, department or ward heads. Nurses were approached during unit or departmental meetings to introduce the study to them and to seek for their consent to participate in the study. Through this process all nurses working in the OPDs and children wards of the selected hospitals were approached to participate in the study.

The knowledge and attitude levels in the inpatient treatment of severely malnourished children of the nurses were assessed using an item survey instrument prepared by the authors i. Data on the professional background included the highest level of nursing education, number of years as a nurse, number of nutrition courses taken in school, among others. The items for the knowledge and attitude scales of the questionnaire were derived from the WHO or UNICEF guidelines for the inpatient management of severely malnourished children, referred to as the guidelines in this article.

The knowledge scale consisted of 26 multiple-choice questions and 15 true or false questions. It covered seven content areas of the guidelines: the causes and signs of malnutrition 11 items , phases of the guidelines 4 items , treatment or prevention of hypoglycaemia and hypothermia 10 items , dehydration 6 items , electrolyte imbalance 4 items , infections and correct micronutrient deficiencies 4 items and achievement of catch-up growth and cautious feeding 2 items.

Each of the 41 items obtained an equal point of 1 if answered correctly yielding a total score of 41 to represent knowledge score.

Questions that were not answered correctly were considered as incorrect. Subtotal scores for each of the seven content areas were determined by the number of items that made up the content area. The attitude scale consisted of 28 items presented as statements defined on a five-point Likert scale. Each item was scored from 1 to 5, to yield a total score of to represent attitude score. High scores indicated positive attitude and low scores suggested poor attitude. The test items were submitted to a panel of three experts in nutrition and health for evaluation of content validity, test format and item construction.

With revisions based on comments of the panel, the items were approved by the panel as the content was valid and appropriate. The final questionnaire was piloted on a sample of fifteen nurses to assess the comprehensibility of the items to participants. These nurses did not participate in the study but worked in a similar area.

The questionnaire was also reviewed by a panel of nutrition experts who considered the questions to have content validity.


Descriptive statistics of mean, standard deviation and frequencies were used to describe the data. Student t -test was performed to compare differences in knowledge and attitude scores between categorical variables.

These nurses had the following highest level of education: certificate Almost all nurses had taken nutrition courses as part of their training in school; Generally, Fewer than half Their source of awareness was also assessed. Almost one half Other sources of information were used sparingly; health information articles were read by Only nineteen nurses Even though nineteen nurses reported ever been trained on the guidelines, 49 The roles they played included feeding, medication, monitoring of vital signs and nutrition education to parents or caregivers.

The nurses obtained high scores on the questions that addressed the causes and signs of malnutrition but had below average The percentage of correct answers to the individual knowledge items of the questionnaire is presented in Table 3. Regarding feeding frequency to treat or prevent hypoglycaemia in a severely malnourished child, Pathetically, With a mean attitude score of The nurses felt that severe malnutrition represents a medical emergency Furthermore, nurses believed that nutrition is very critical in the treatment of severe malnutrition The nurses recognised the importance of team work in the provision of care, as Despite the general positive attitude reported towards the inpatient management of severely malnourished children, a few deficiencies in attitudes were also noted.

Most of the nurses did not believe that it was their responsibility to undertake the nutritional assessment of the malnourished child, As Gender did not have an influence on the knowledge scores of the nurses. Nurses who reported ever receiving a refresher course on nutrition training after school significantly scored higher than those who reported no receipt of a refresher course Receipt of training on the guidelines also influenced the knowledge scores of the nurses.

Factors associated with their knowledge and attitudes were also investigated. However, nurses had positive attitudes towards malnutrition and its management in children. From the seven content areas assessed in this study, the nurses scored better in the questions that addressed their general knowledge on the causes of malnutrition shown in Table 2 but scored below average on the questions that addressed the signs and symptoms of the different forms of malnutrition such as kwashiorkor.


The less desirable knowledge levels of the nurses regarding malnutrition and its management could be due to the inadequacies in nutrition education during nursing training. In this study, nurses said they received an average of two courses 3 hours a week for each course on nutrition in their entire nursing training in school. Another important finding of this study was that nurses who reported ever receiving a refresher course in nutrition or training on the WHO or UNICEF guidelines had significantly higher scores in knowledge than those who did not see Table 5.

Furthermore, those who said they had awareness on the guidelines also tended to score higher than those who reported lack of awareness see Table 5. This was made more evident when a positive correlation was observed between the number of nutrition courses taken in nursing school and knowledge scores. This recognises the role of nutrition education during nursing training and also supports the idea of providing refresher training programmes for nurses to help build their capacity in malnutrition and its management. Clinical experience in the management of severely malnourished children was found to be independently associated with knowledge and attitude scores see Table 5.

Nurses who reported ever participating in providing care to severely malnourished children scored significantly higher in the knowledge and attitude scores than those who did not. Similar to our findings, Kobe reported that ever conducting nutritional assessments correlated directly with knowledge scores in a study that determined the nutritional knowledge, attitudes and practices of nurses.

While several studies have reported findings similar to ours Park et al. Nonetheless, these findings suggest that in designing targeted educational interventions to improve the nutrition knowledge of nurses, consideration should be given to these demographic factors. This study tackled a critical gap in the literature i. It provided evidence regarding the inadequacy of nutritional knowledge among nurses. It further brings to bear the inadequacies in nutrition education during nursing training and provides important points for curricula planning and change.

The cross-sectional nature of this study makes it difficult to establish causality. Despite the amount of financial resources invested in food security, the increasing international focus on nutrition, and the general reduction in world hunger, more than million people still go hungry every day. One of the responses to such challenges would be to increase productivity in rural areas, and this could be achieved by investing in training and innovation — for example, disseminating agricultural best practices and scaling up innovative and more sustainable farming techniques — and by improving access to markets for smallholder farmers — two of IFAD's core thrusts.

Over the years, IFAD has accumulated a wealth of experience and knowledge on how to address such critical challenges in many regions of the world, and this is the kind of knowledge an institution like IFAD should capitalize on to improve itself and its development effectiveness. This "feedback loop" is carried out through independent evaluations, which generate reports and syntheses, which in turn inform IFAD's Board members, senior management and staff about the lessons learned and provide recommendations to improve IFAD's operations and therefore its development effectiveness. 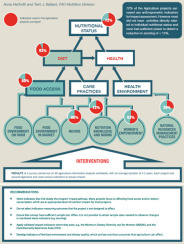 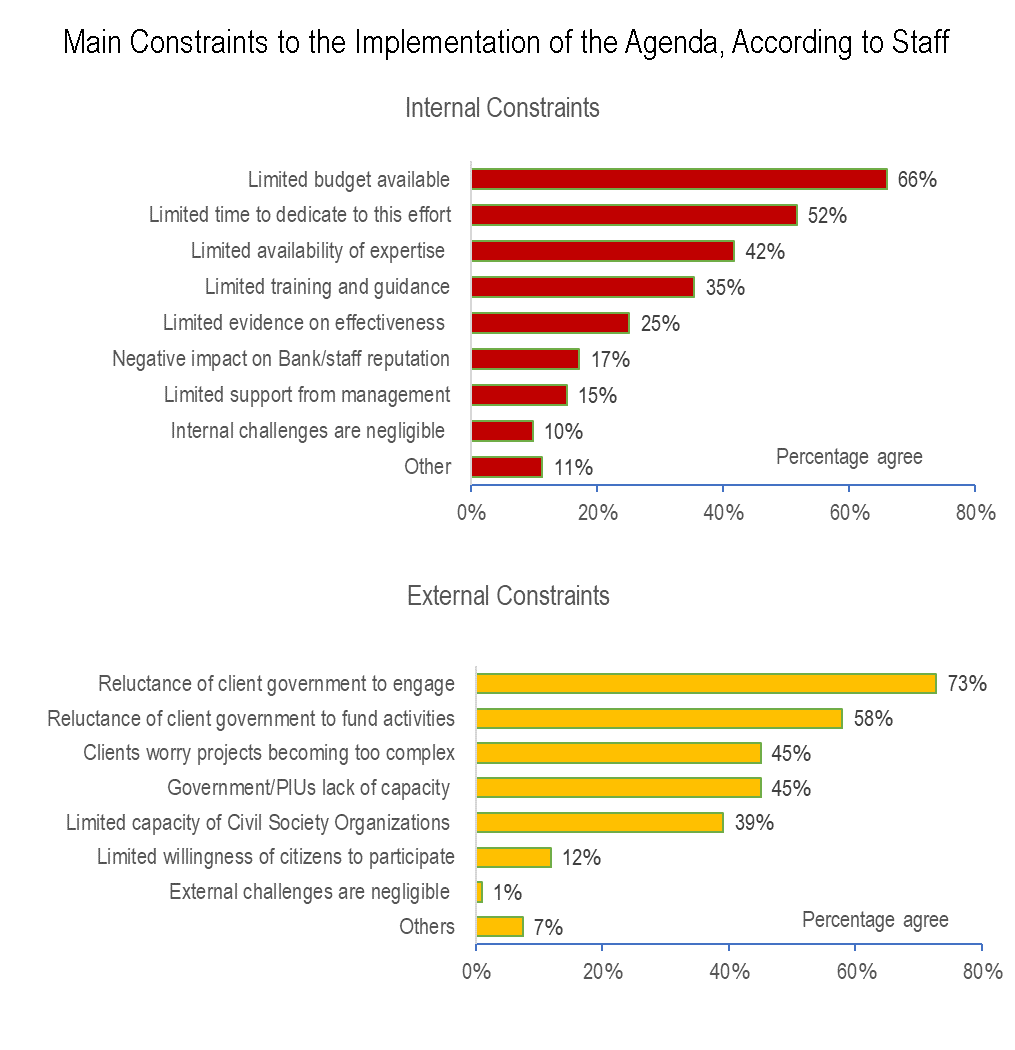 Related What Can We Learn from Nutrition Impact Evaluations? (Independent Evaluation Group Studies)